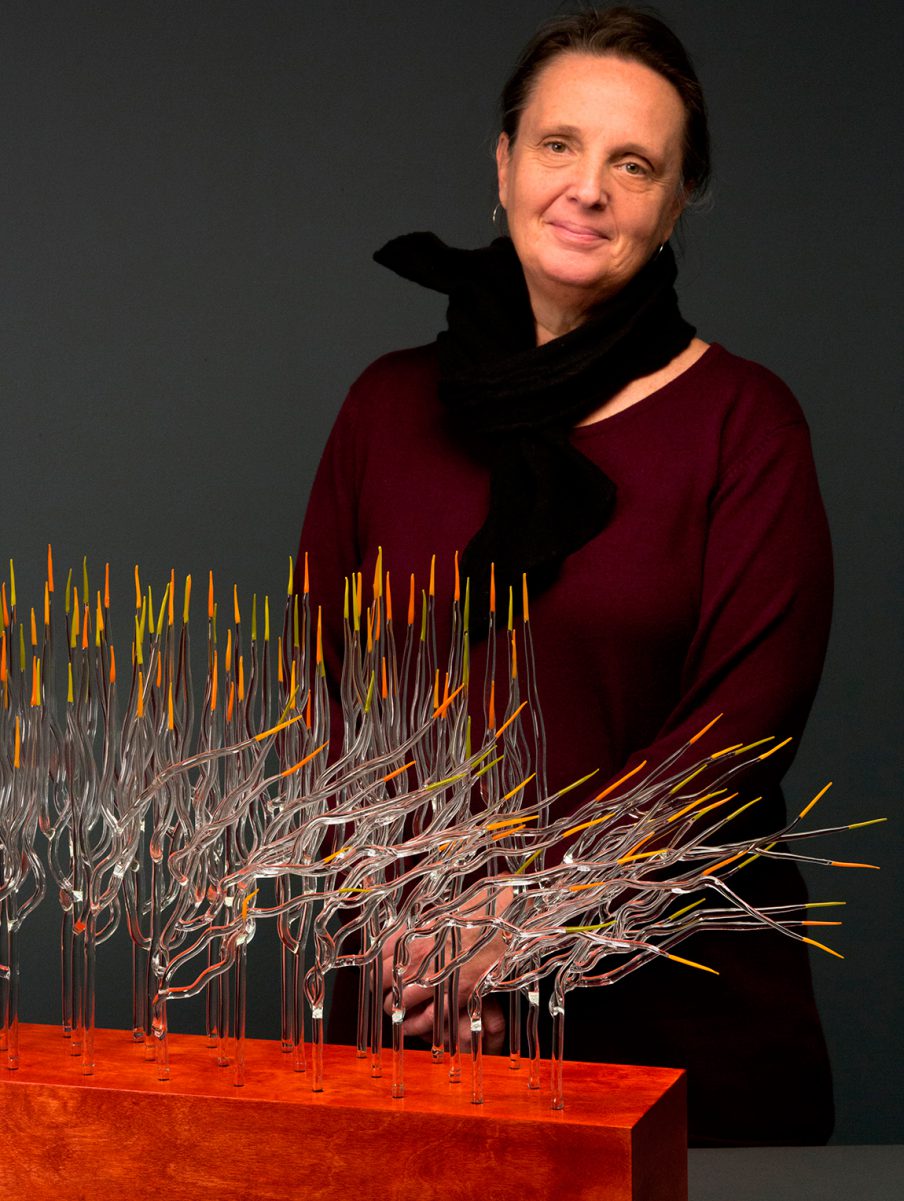 Susan Edgerley was born in Toronto, Ontario in 1960. She has lived most of her life in Montréal, Québec where she grew up amidst a rich cultural and linguistic diversity and where she was first introduced to crafts. After having studied for three years at John Abbott College, a chance circumstance confirmed her life long passion for creating and led her to study glass at Sheridan College School of Crafts and Design in Ontario from 1981-1984. The combination of the supportive creative environment and the challenge of working with such an enigmatic material proved transforming and set the foundation for her personal work, as well as her future involvement with the glass community.

Her unique works explore the expressive and narrative potential of linking glass with other materials, opening up a richly textured dialogue within each piece. Her pieces are sculptural metaphors underlining the fragility, diversity and complexity of existence. Recently her work explores ideas light and shadow through unity and multiplicity, individual and community, by creating large scale wall installations using multiple cast and most recently flameworked glass elements.

Susan’s work has been shown extensively in Canada, as well as in the United States, France, England, Germany, Finland and Singapore. She has exhibited in many solo and group exhibitions including Galerie Elena Lee, Montréal, the Miller Gallery and John Elder Gallery in New York, Holsten Galleries in Massachusetts and Buschlen Mowatt, in Vancouver and California as well as at Habatat Galleries in Florida. She has been included in many important national and international exhibitions and invitationals as SOFA Miami, New York and Chicago; Unique, 30 years of outstanding crafts at the Museum of Civilization, Quebec , Canadian Glass 1970-1990: Moving the Spirit, the inaugural exhibition of the Waterloo Clay and Glass Gallery; Sculptural Explorations in Glass, a traveling exhibition of the Koffler Gallery to Finland and Germany; Exposition International de Verre Contemporain Invitational in Rouen, France and International Art Exhibitions in Montréal, Toronto and California. Her work is also included in several major public and private collections including the Musée des Beaux Arts du Québec, The Montreal Museum of Fine Arts, Wuspum Museum and Speed Museum USA, the Claridge Collection in Montréal and the Canadian Museum of Civilization in Gatineau.

As well as developing an important body of work, Susan has been an active glass faculty member and has taught for the past 25 years in glass programs in Ontario and Québec. She was a teaching faculty member of the glass department at Sheridan College (1985-87) and at Espace Verre/ Centre des métiers du verre, in Montréal, Québec ( 1988-2006)

When she returned to Montréal in 1988, Susan worked in close collaboration with Francois Houdé, co-founder of Espace Verre, and was intensely involved with the beginnings of this first glass center in Québec and with the development of its many mandates. She was responsible for implanting Québec’s first College level glass program as Pedagogical Director (1989-90). As President (1993-95) and as a member of its Board of Directors, (1991-95 and again from 2000-02), her active involvement touched on every aspect of the development and growth of the glass programs at Espace Verre, their financial support and their realization. In 1992-93, Susan was responsible for organizing a “Transitional Hot Glass Studio Program ( Atelier de Transition)” within Espace Verre, the purpose of which is to encourage the growth and development of glass in Québec by providing graduates with up to 2 years of access to hot glass facilities. The members run, build and maintain this studio themselves which allows them to develop their work, their markets and skills as professional craftspeople. The Transitional Studio recently celebrated its 10th Anniversary. In 1995, Susan was made an Honorary Lifetime Member of the Board of Directors of Espace Verre.

Susan has been an invited speaker at SOFA Chicago in 1997 & 2008, as well as during the Glass Art Association of Canada (GAAC) Conference in Toronto (1986), Vancouver (1992), Red Deer (2000), Montreal (2010) and at the Glass Art Society (GAS) International Conference in Philadelphia (1987). She has participated as artist-in-residence at the New York Experimental Glass Workshop (1988) and was an invited participant in the “Pedagogy in Glass” Symposium in Segovia and Barcelona, Spain. In 1995-96 as one of the executive directors of the Canadian Glass Conference, and as an elected representative of Espace Verre, she helped organize the Canadian Glass Conference in Montréal, as well as all its related activities and exhibitions in May 1996. She completed a two year mandate (1997-99) from the Minister of Culture and Communications of Québec, as a committee member for the provincial public art program “Art Integrated into Architecture and the Environment, 1% Program”. She has taught professional glass workshops in Belgium (2001 & 2002) and has served on the Board of the Glass Art Association of Canada (GAAC) from 2001-2004. She has been a nominated finalist for the prestigious Bronfman Award for Excellence in Crafts in 2002 and 2003 and in that same year, was elected as an Honorary Member of the Royal Canadian Academy of the Arts. In 2006, she was a short listed finalist of the Bombay Sapphire International Glass Prize. The selected international artists exhibited original works in London, England.