This show highlights the Modernist influences on my Tlingit ancestry, and cultural objects. I’ve long been influenced by the Modernist movement in art and how those artists were inspired by Native art, Oceanic and African art. In some cases, the Modernists were known to appropriate these forms and they realized that these cultural objects were created for a purpose, to express human relationship to the cosmos.

I love reflecting on Modernism which led to Primitivism, Surrealism and even Dada. So in this collection of pieces you can see spare organic forms that relate to modernist and minimalist sculpture, but they are adorned with Tlingit design work to create my version of Ancient Modernism. 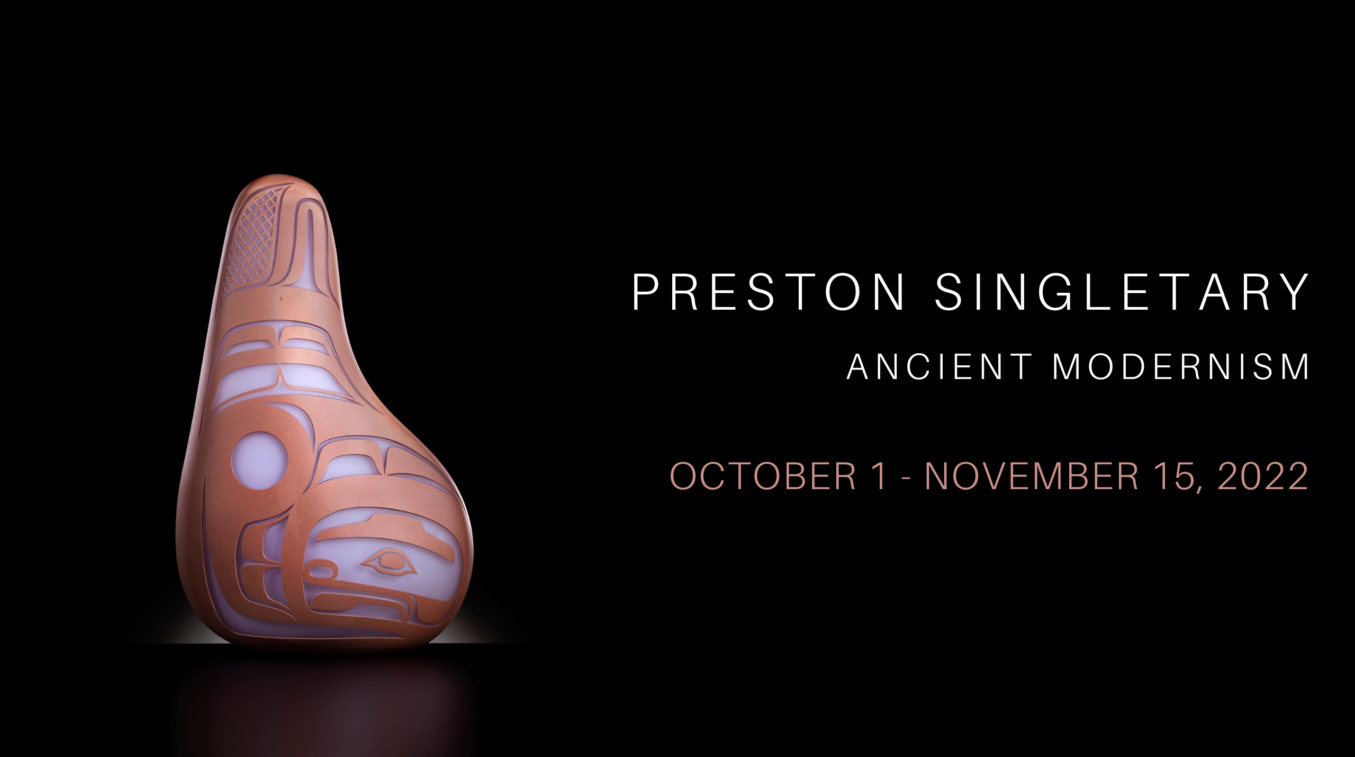 Ekin Deniz Aytac and Joshua Davids return with new entries in their unique body of work. Continuing within the ‘Cityscape’ motif in which traditional vessel forms are manipulated into unconventional objects, this new series of sculptures place an increased emphasis on pattern, color, and contrast to elicit profound expression in glass art. Taking inspiration from art deco design elements that became herald of the age of the modern city. Each artwork is meticulously crafted, built up through layers of hot glass color and then deconstructed in the cold shop to reveal a final form. As our cities, as well as those of the past, have become monuments to the cultures that built them, each object speaks to the formative power of the individual contributing to the evolution of an environment containing sublime immensity. 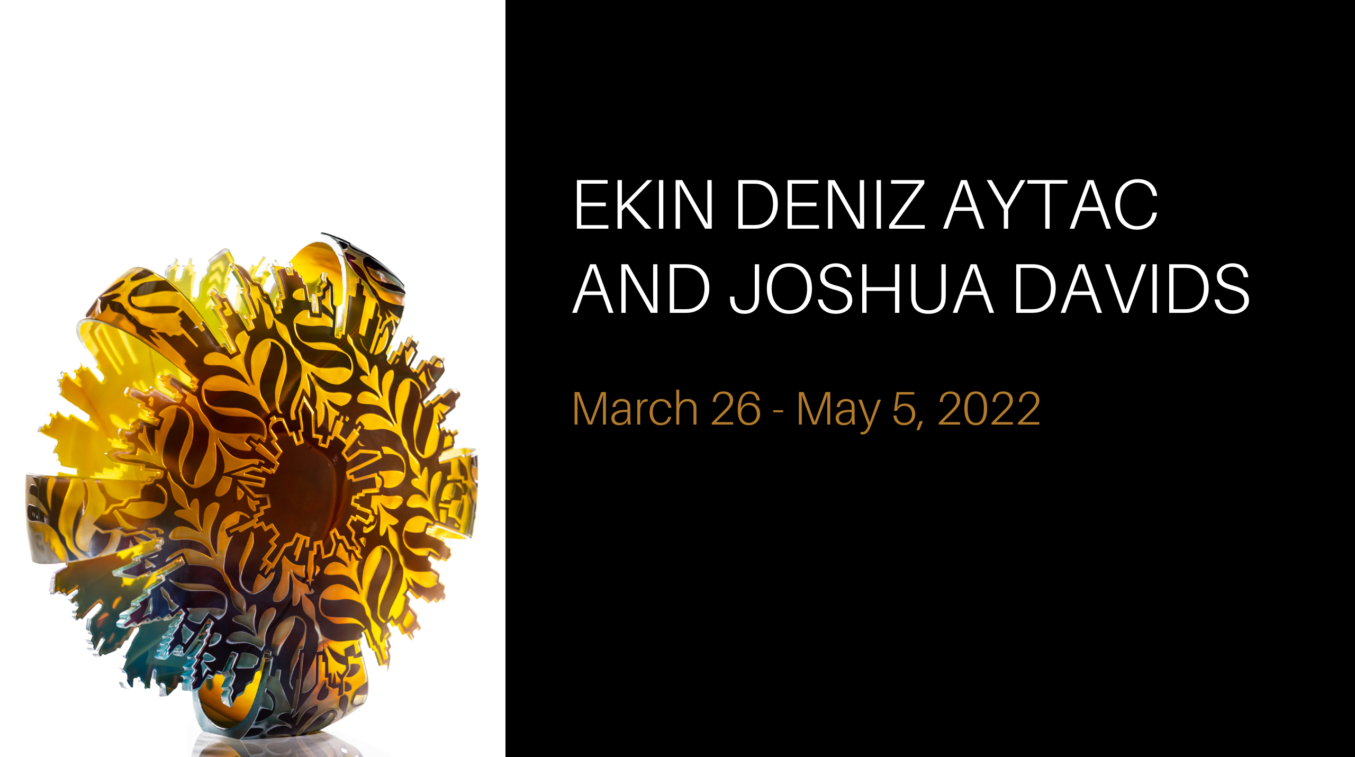 Tim Tate and Michael Janis each grew up as avid readers, each finding the imaginary world as often much more enticing, beautiful and adventurous as what they found around them.

Tim’s obsession’s were Jules Verne, H.G. Wells, Heinlein, poetry, short stories, novels, movies, science fiction, adventure, a wide spectrum of genres …. all the things that produced wonderous worlds and parallel universes and were filled with narratives so different from his own life. As a kid, Tim became a storyteller, imagining (or uncovering) hidden connections between ideas, events and experiences. He wrote his first poem at 7 and his first story at 8. He could take seemingly disparate things and find ways to bring them together to create new meanings. From those formative early days, the stories continued as Tim used glass as a sculptural medium. Tim even learned etching on glass, casting figures and video just so he could conjure new worlds.

As an architect, Michael Janis learned to communicate visually complex ideas about human experience both symbolically and figuratively, using the juxtaposition of unrelated elements in the utterly modernist mode of collage. His frit powder drawings of people evoke both self-knowledge and evasive maneuvering. Narrative is employed loosely here. Imagery gives form to the often incompatible mix of lived experience, personal histories, and the acting out of roles both obligatory and imagined. Rather than explicit tales, he tries to conjure a world that evokes the slipperiness of memory, longing, and a disquieting curiosity.

When Michael Janis and Tim Tate met, almost 20 years ago, they discovered a shared fascination of narrative sculpture- one that seeks to arrive at an image that is both unflinchingly candid in physical representation and psychologically evasive. Working together, they are interested in the simultaneous read of an immediately recognizable image that asks the viewer to linger over history and meanings that unfurl more slowly. Mark, line and material become an extension of touch in the act of representation. The relationship of hand to subject, negotiated through the material, can elicit a response of both visual and tactile.

With these confines they create work in many techniques, but if you stand slightly back and see their history a huge thread of interconnected stories weave through their work from day one. The beauty comes into focus and the viewer sees the edges of a world not dissimilar to this one, but so much more thoughtful.

They present this glimpse into that alternative world, seemingly unstuck in time somewhere between past and future. 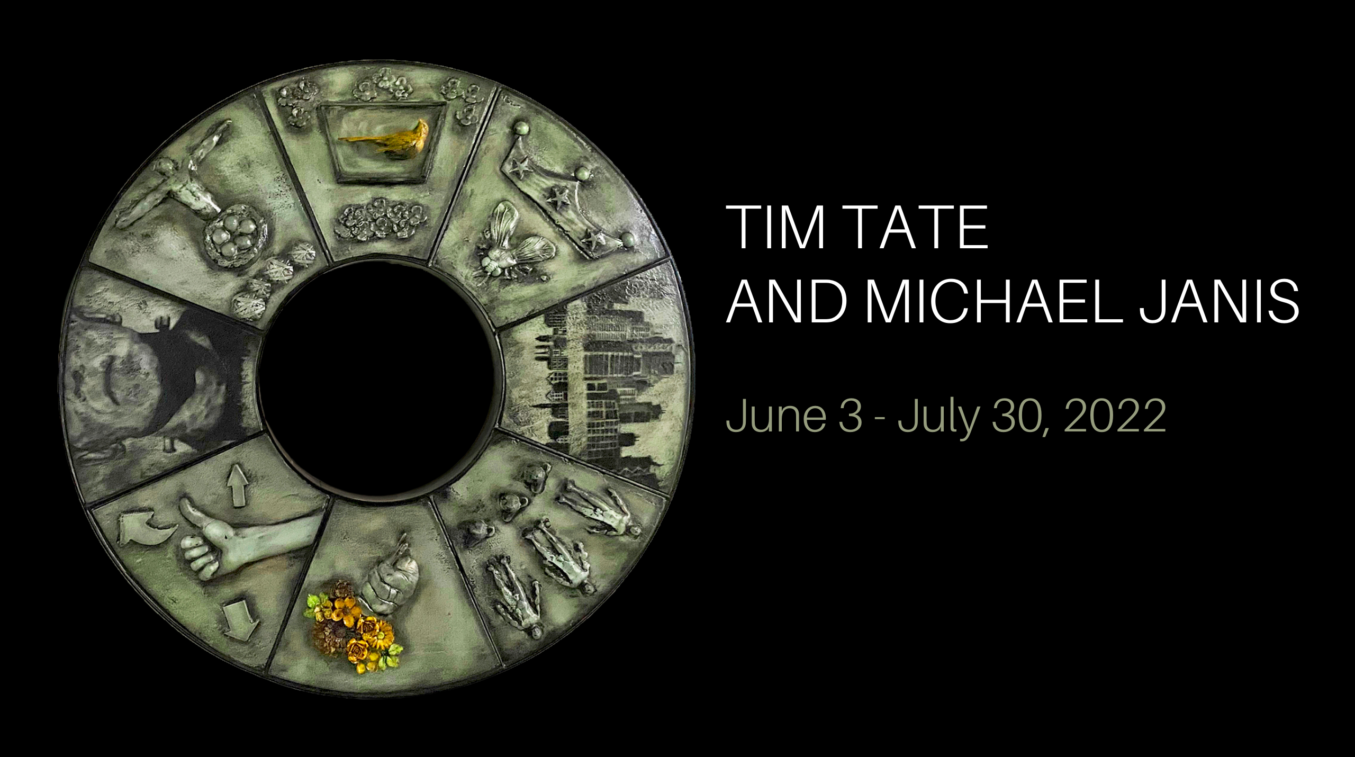 Working on our rural farm in Wales, in isolation, we have been lucky to continue making our glass in strange times. This is our fifth Exhibition with Sandra Ainsley across two decades. It is an honor to work with Sandra and Daniel and to be able to present this new collection. The comets, meteors, and miniature cabinets are being seen for the very first time here, inspired by our exhibition “Walking in the Void” from the Ebeltoft Museum in Denmark (2020-2021). The incalmo-batutto families are also made expressly for this show, expanding on the Novae Species series begun two years ago. Taken together, the exhibition is a reflection on humanity and our place in the larger universe. 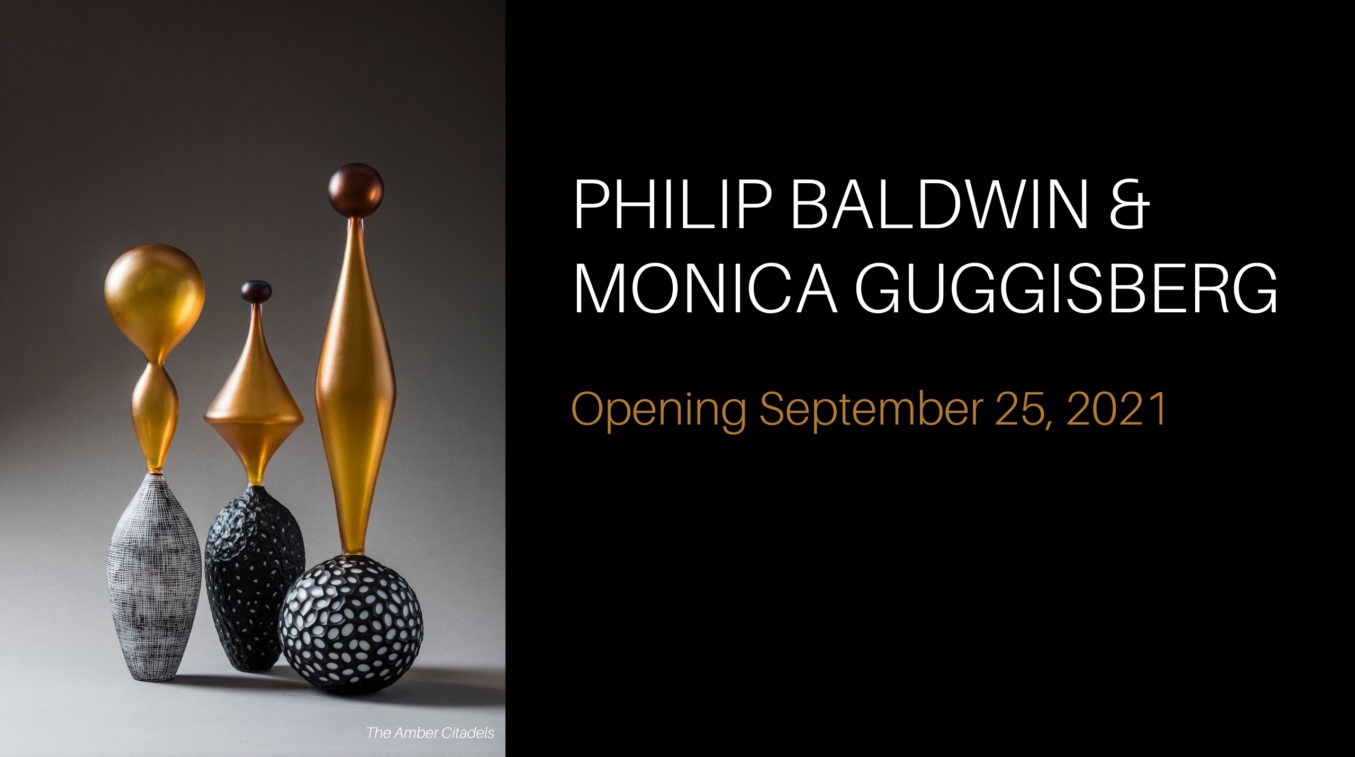 Sandra Ainsley Gallery is pleased to announce CHIHULY, the latest collection of work from artist Dale Chihuly. The work will debut at Sandra Ainsley Gallery, on October 24, 2020. A behind the scenes look at the making of this collection and artist talk can be viewed below. Known as a pioneer of the studio glass movement, Chihuly’s latest body of work expands on his record of innovation and invention.

The exhibition will present works in glass and drawings which reveal Chihuly’s creative process. This collection of work started to take shape in 2019 when he began experimenting with an ancient caneworking technique called merletto (the Italian word for lace), Chihuly’s inspiration for the collection’s name. A labor-intensive and complex process, merletto was developed on the Italian island of Murano in the 15th century. The artist’s approach to CHIHULY exhibition departs from the precision of the classic Venetian technique and relays an expressive energy to his mesh-like patterns. END_OF_DOCUMENT_TOKEN_TO_BE_REPLACED 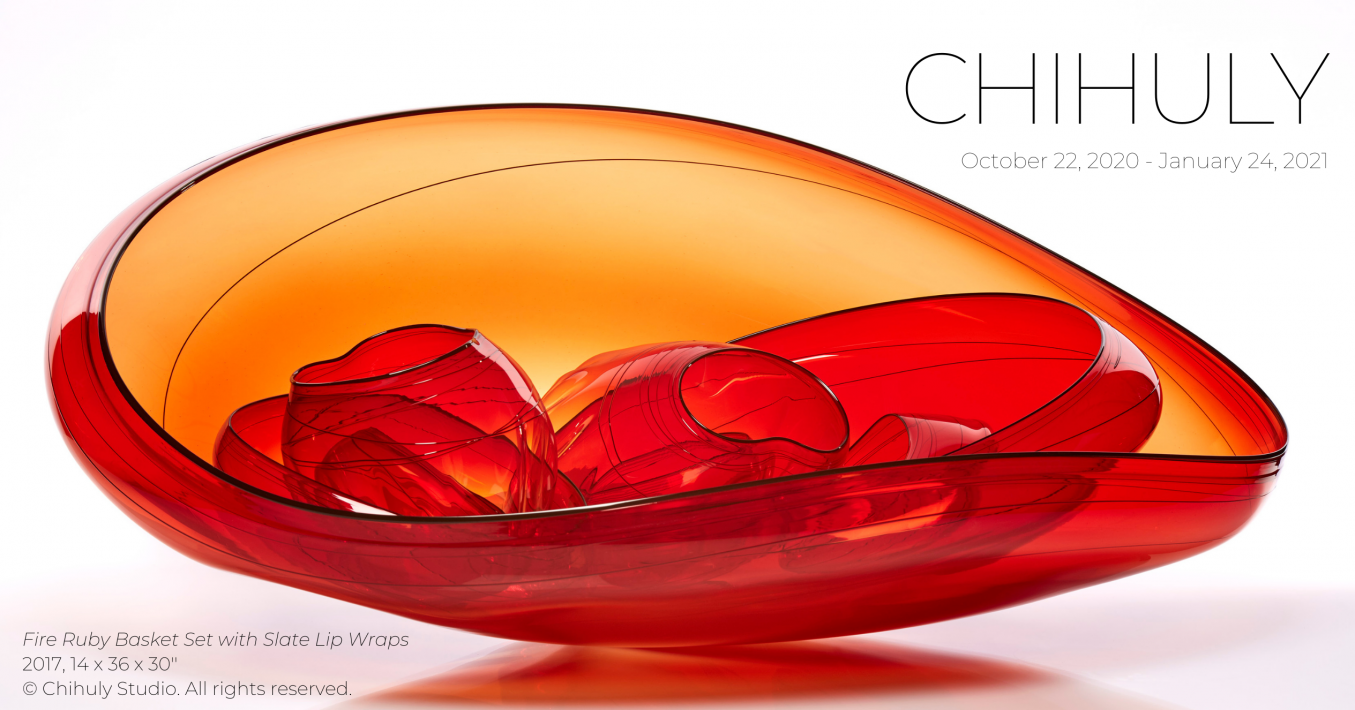 Preston Singletary: Humanity at the Crossroad

My Tlingit name is Cochane. I’m from the Eagle moiety, the Kagwaantan, box housegroup, and my family’s clansymbol is the Killer Whaleand the Brown Bear,we also are related to the Wolf. In the Summer of 2000 I befriended Joe David (Nu Chah Nulth), a respected and established carver from Vancouver Island. END_OF_DOCUMENT_TOKEN_TO_BE_REPLACED

Her unique works explore the expressive and narrative potential of linking glass with other materials, opening up a richly textured dialogue within each piece.  Her pieces are sculptural metaphors underlining the fragility, diversity and complexity of existence.  Recently her work explores ideas light and shadow through unity and multiplicity, individual and community, by creating large scale wall installations using multiple cast and most recently flameworked glass elements.

It is important to me that the objects I make not only have a strong conceptual base but that they also build upon the qualities inherent to the material. Strength, fragility, transparency, opacity, fluidity, and stasis; these are all elements that I attempt to instill or refute in my work. People often comment on how the pieces seem like sea creatures or sea forms. Having been raised in Saskatchewan, I try to draw on the grand sweeping gestures and vast subtle movement of the prairies END_OF_DOCUMENT_TOKEN_TO_BE_REPLACED

Twenty five years living in a rainforest environment has impacted strong, and this is reflected in every aspect of his artwork today.  Being direct witness to the behaviours of the birds, animals, reptiles and insects that live there, has given an increased understanding  of the wonder and fragility of the natural world.

Toots Zynsky is known internationally as one of the most innovative voices in the American Studio Glass Movement. Born in Boston, and raised in Massachusetts she earned her BFA from the Rhode Island School of Design in 1973. In 1971, she assisted Chihuly and others in the founding and early development of Pilchuck Glass School.

END_OF_DOCUMENT_TOKEN_TO_BE_REPLACED

Susan Collett: Concurrents an Exhibition of Clay Sculpture and Prints

Large-scale clay sculpture and printmaking has become the focus of her work. The clay works are hand-built of earthenware paper clay and multi-fired to achieve a complex patina of surfaces. The monoprints are printed from plates made of stitched industrial grade roofing copper. 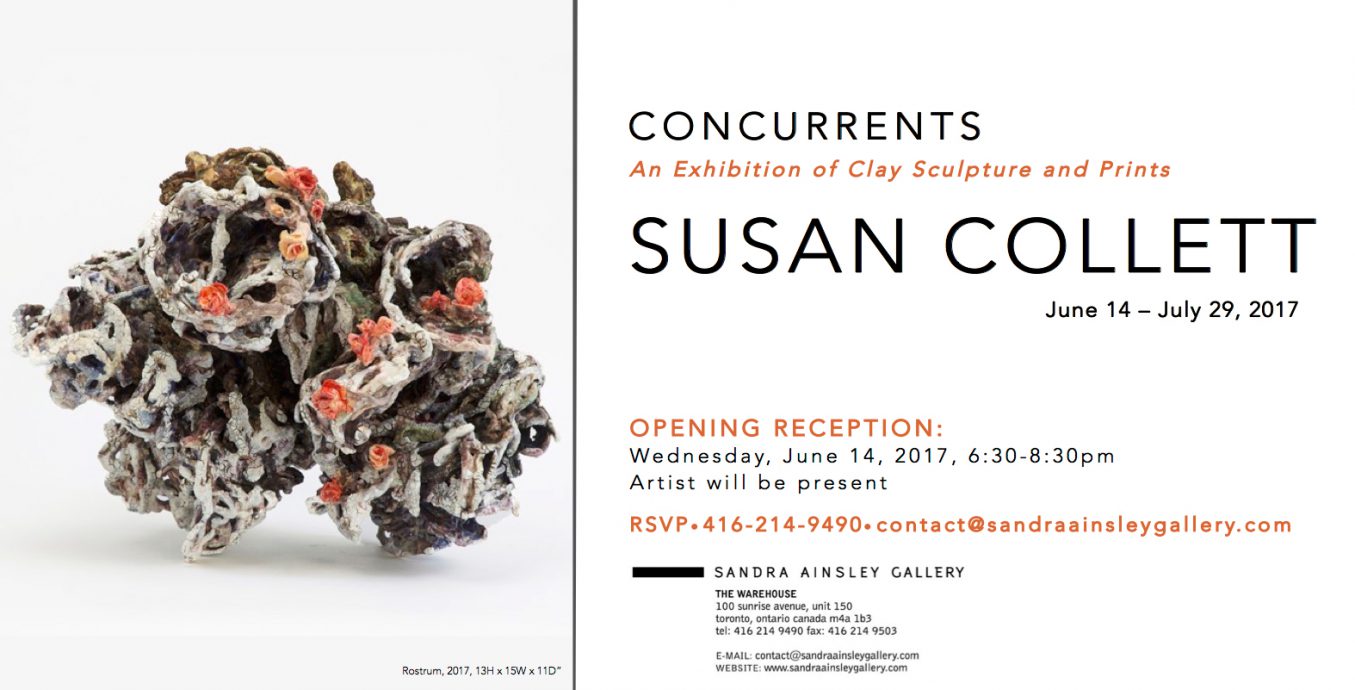 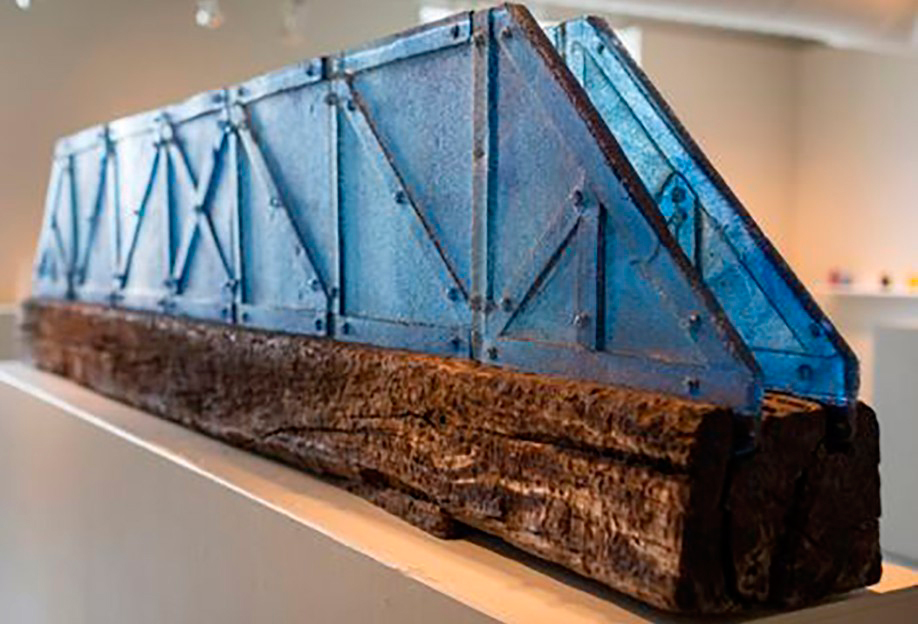 On Saturday May 14, Dutch artist Peter Bremers will discuss the development of his latest series The Inward Journey at Sandra Ainsley Gallery. Bremers will use images as well as sculptures in the gallery to explain how his travels have transformed him and his art. 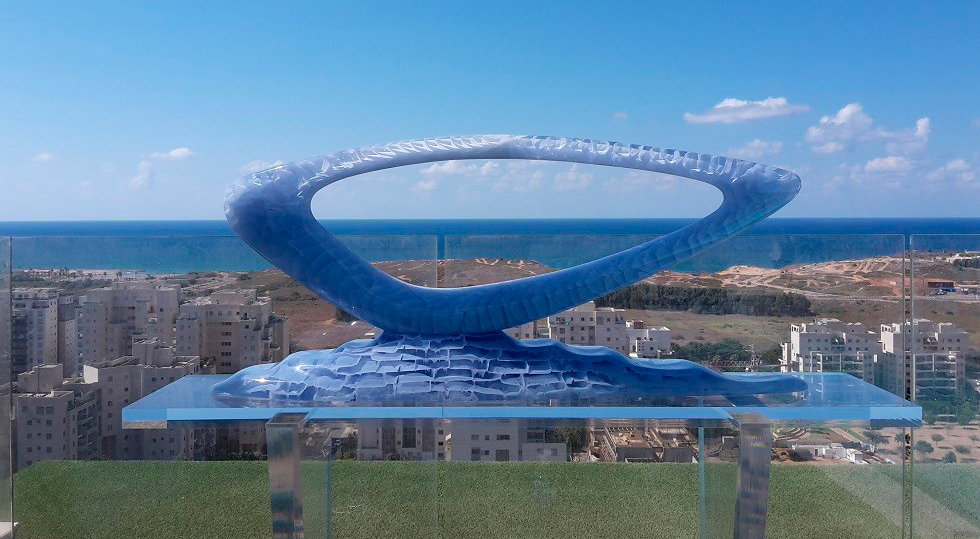 Sandra Ainsley Gallery continues to celebrate our 30th anniversary with an exhibition of new work by Toots Zynsky, who is known internationally as one of the pioneering and most innovative voices in the contemporary art glass movement. Born in Boston, and raised in Massachusetts she earned her BFA from the Rhode Island School of Design in 1973. In 1971, she assisted Chihuly and others in the founding and early development of Pilchuck Glass School. END_OF_DOCUMENT_TOKEN_TO_BE_REPLACED

Latchezar Boyadjiev is known for large-scale cast glass sculpture in dramatic shapes and vibrant colour. His inspired creations are cast in the Czech Republic where he is able to select the most precise glass colour and desired consistency. Thomas Scoon’s work focuses exclusively on the human form. Although abstracting the form, he is able to emphasize the essence of gesture, gender, and other human characteristics. END_OF_DOCUMENT_TOKEN_TO_BE_REPLACED

While Baldwin and Guggisberg do not exclusively make vessels, any survey of their work will show them as amongst those contemporary sculptors in glass who regularly explore glass’ long relationship with functionality, who work as heirs to the great tradition of the creation of objects for everyday use. If they are heirs, and if they are interested in acknowledging the forms – especially the vase – that have intrigued artists who work in glass for the last several thousand years, END_OF_DOCUMENT_TOKEN_TO_BE_REPLACED

Jon Kuhn is regarded as one of the leading glass artists in the world. With works featured in over 40 international museums including the Metropolitan Museum of Art, the Vatican Museums, the Carnegie Museum of Art, the White House Permanent Collection, the National Museum of American Art and hundreds of private residences and public spaces, millions have enjoyed his beautiful works.

END_OF_DOCUMENT_TOKEN_TO_BE_REPLACED

This exhibition is part of the Toronto International Jewellery Festival in conjunction with Meta-Mosaic, the 2013 SNAG Conference END_OF_DOCUMENT_TOKEN_TO_BE_REPLACED

Dan Dailey works primarily in his Kensington, New Hampshire studio with the help of his staff of assistants. He is also Professor Emeritus at Massachusetts College of Art where he founded the Glass Department in 1973. He has taught at numerous glass programs including Rhode Island School of Design, Pilchuck Glass School and Haystack Mountain School of Crafts and he has given lectures and workshops throughout the United States, Europe and Japan.
END_OF_DOCUMENT_TOKEN_TO_BE_REPLACED 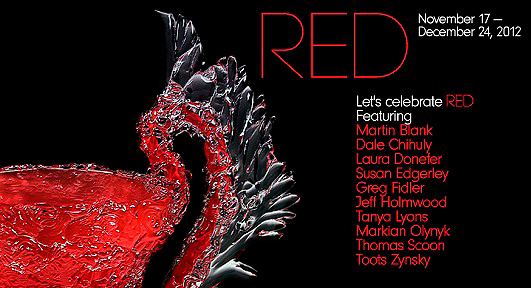 A chance meeting with Dale Chihuly in November 1988, crystallized into him opening my gallery in the Exchange Tower in May 1989. From the beginning, it was meant to be; initiating a 23-year professional collaboration and friendship that has enriched the Canadian art landscape. It has been my honour to present Chihuly’s work and to mark every gallery milestone with him.

END_OF_DOCUMENT_TOKEN_TO_BE_REPLACED 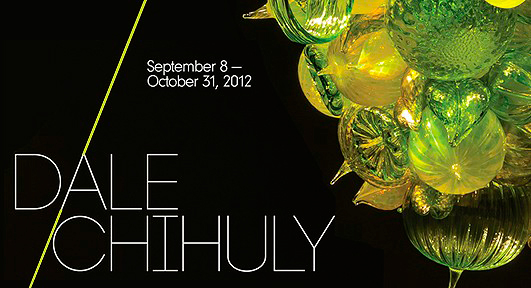 Philip Baldwin and Monica Guggisberg are vessel-makers, and it is vessels, in all the permutations and possibilities, that are at the core of the Boats series. While Baldwin and Guggisberg do not exclusively make vessels, any survey of their work will show them as amongst those contemporary sculptors in glass who regularly explore glass’s long relationship with functionality, who work as heirs to the great tradition of the creation of objects for everyday use. END_OF_DOCUMENT_TOKEN_TO_BE_REPLACED 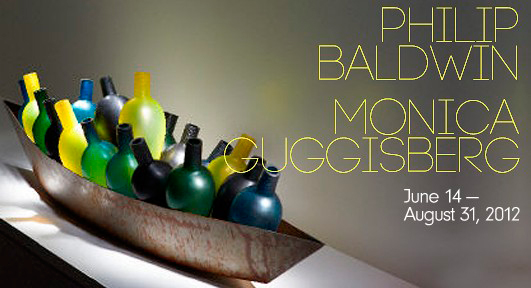