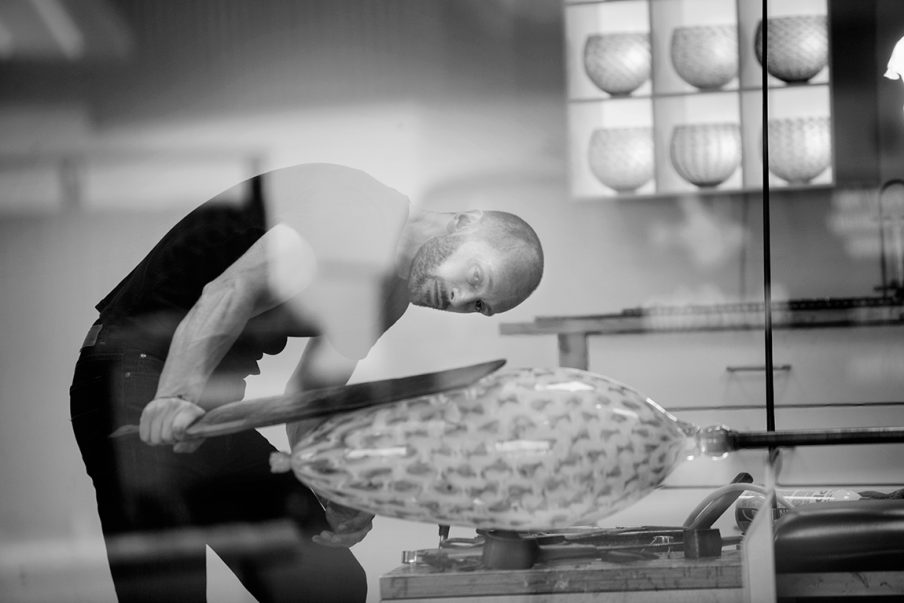 “I dream of creating light, resilient forms with an elaborate textile organization, where with simple effects I exploit the delicacy and transparency of the glass. I feel I’ve got hold of something fertile, I’m not groping my way forward but working steadily onward. I’m working hard, and there’s lots of rejects as I pursue and refine the paths that evolve through my professional skills. Only time and hopefully my artistic talents can expand these paths.”

Unlike most of his fellow artists, who went to art school, Tobias Møhl’s training came from his on the job experience as a glassblower for the well-known Danish firm Holmegaard GlasvÃ¦rk, where he started in 1989 at the age of 19. By 1992 he was a master glassblower. He was an assistant glassblower for Lino Tagliapietra’s master class at Pilchuck in 1996 and at Tagliapietra’s master class at Haystack in 1997. Blowing for Tagliapietra gave Møhl good exposure and his reputation in the U.S. began to soar. By the end of the 1990s Møhl had earned international recognition.

Møhl’s work is a unique marriage of classical Venetian technique with a clear Scandinavian aesthetic. His work is testimony to his considerable skill and interest in traditional technique and craftsmanship. At the same time he also explores innovative options with glass. He uses a traditional process, creating a mosaic of glass that is picked up with a gather of hot molten glass and then blown into shape. The blowing process stretches the mosaic into intricate patterns on the glass. While this technique is traditional, the patterns he creates express a contemporary aesthetic. Many of Møhl’s vessels are white on white or white on black. He uses color sparingly and often he’ll use just one or two colors from his simplified palette.

Tobias Møhl and his wife Trine Drivsholm, who also has a well deserved international reputation for her glass art, work together in their studio in Ebeltoft, Denmark.