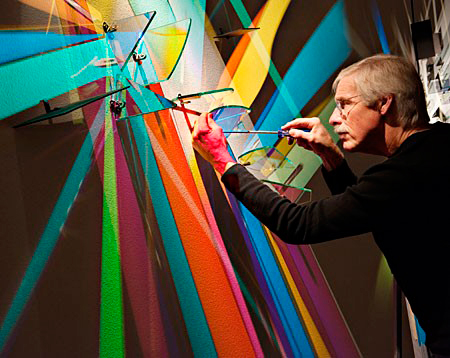 Stephen Knapp is an American artist best known as the creator of lightpaintings, which have been called one of the first new art mediums of the twenty-first century. Dispensing with traditional media and narrative content, Knapp is one of a small group of artists who work with light. His lightpaintings make visible the light that surrounds us and transforms it into something physical yet inherently transcendental.

Knapp has gained an international reputation for large-scale works of art held in museums, public, corporate and private collections. He has had solo museum exhibitions at the Boise Art Museum, the Chrysler Museum of Art, the Naples Art Museum, the Butler Institute of American Art and the Flint Institute of Arts, among others. His work has appeared in many international publications including Art and Antiques, Architectural Record, ARTnews, The Asahai Shimbun, Ceramics Monthly, The Chicago Sun Times, Interior Design, The New York Times, Progressive Architecture, Sculpture Magazine, The Washington Post and other publications.