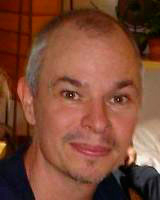 When I originally began sculpting with the sandblaster (1985, I think) I was trying to find a way to articulate my perception of my relationships, particularly my relationships with women. Be it my mother, my sisters, or my lovers.

To me, this newly discovered medium of molten glass had a most female-like disposition so I tried to express that through blown glass with mostly unsatisfactory results. I was much more pleased with the results when I added the sandblaster into the equation.

I would try to blow a piece of unique character and beauty; it would have to be alluring and seductive as a form. With the sandblaster I would then attempt to enhance or deny the original qualities that I had tried to instill in the form. The result, when it was successful, would be a piece that would draw the viewer to it while simultaneously forcing the viewer to consider how intimate a relationship they were capable of maintaining with such an object.

Since that time I have explored many different approaches to designing and executing my work. Drawing on inspiration from nature, man made objects, personal relationships, and my unconscious all with varying degrees of success. Any time I feel myself getting lost in the creative process either by making what are to me unsuccessful pieces or by suffering from a complete dearth of ideas I simply refer back to my original concept and start again.

It is important to me that the objects I make not only have a strong conceptual base but that they also build upon the qualities inherent to the material. Strength, fragility, transparency, opacity, fluidity, and stasis; these are all elements that I attempt to instill or refute in my work. People often comment on how the pieces seem like sea creatures or sea forms. Having been raised in Saskatchewan, I try to draw on the grand sweeping gestures and vast subtle movement of the prairies more than on the qualities of the sea, with which I am quite unfamiliar.
The most successful pieces are often executed in a kind of fog. The forms are usually simple and unique, and to me, evocative of someone, something, or someplace. The designs are a natural extension of this simplicity and personality. Too much thought inhibits the expression and causes the piece to look forced.